Joe made a long cast, allowed the fly to sink for several seconds, and then began the retrieve. On the third strip, the line was yanked violently from his hand! Joe was shortly “on the reel” as the fish made a blistering run. After a tenacious battle, a four-pound Spanish mackerel was brought alongside, hoisted for a quick photo, and then released to please another angler.

In some regards, Spanish mackerel are an under rated gamefish. In Florida, tarpon, redfish, bonefish, permit, and snook get a lot of press, but “Spanny-macks” are a terrific fish to target on fly! They are fast, aggressive, beautiful, abundant, and great eating for anglers who want to keep a fish for a meal.

Spanish mackerel are a pelagic species that are found along the US coast from Texas, around Florida, and up to the mid-Atlantic states. They can be caught in the inshore bays, along the beaches, in passes and inlets, and in the open waters of the Gulf of Mexico and Atlantic Ocean. Ideal water temperature in from the upper 60's to mid-70's.Spanish mackerel are a schooling fish. Once located, the action can be fast and furious. Mackerel are often seen foraging on the surface. This situation offers anglers some exciting fishing as a hook-up is almost guaranteed. Unlike false albacore and some other species, Spanish mackerel will often stay up on top for long periods of time. This makes it fairly easy to approach withing range for a good presentation. This action can occur in the bays, but more often happens in the open Gulf and Atlantic.

Fly anglers will encounter Spanish mackerel in the inshore waters as well. Often times, they are caught while drifting large flats and blind casting. Submerged grass beds are prime areas to fish. Spanish mackerel are often an unexpected, but most welcome, interloper for Florida anglers targeting spotted sea trout.

Fly tackle for anglers targeting Spanish mackerel is pretty basic. An 8wt rod with an intermediate sink tip line is a great all-round outfit. It allows anglers to fish a fly quickly on the surface as well as getting it down in the water column when needed. Leaders need not be complicated, either. Anglers can purchase a tapered leader or build a simple leader using 4' of 40 lb. and 4' of 25 lb. fluorocarbon leader. In either case, a short “bite tippet” is required. In clear water, an 18” piece of 30lb to 50 lb. leader works well.

Anglers can also use a short piece of wire, though strikes will usually be reduced. In murky water, this is less of an issue. One technique used by guides is to tie a D.T. Special variation on a long shank hook. The longer shank acts as a leader of sort. Spanish mackerel will usually hit the back half of the fly.

Speaking of flies, selection is pretty simple as well. Any baitfish pattern that mimics the local forage will produce Spanish mackerel. A #1 white over chartreuse Clouser Minnow is a terrific all-round fly. Crystal Minnow and D.T. Special patterns are also very productive. Some anglers prefer to use synthetic material on their mackerel flies, feeling that they are a bit more durable than bucktail.

If there is one common mistake that anglers make when fly fishing for Spanish mackerel, it if not working the fly fast enough. Spanish mackerel are very aggressive and will often prefer a fast-moving fly. At times, anglers may even need to resort to a two-handed strip to keep the fly moving fast enough. 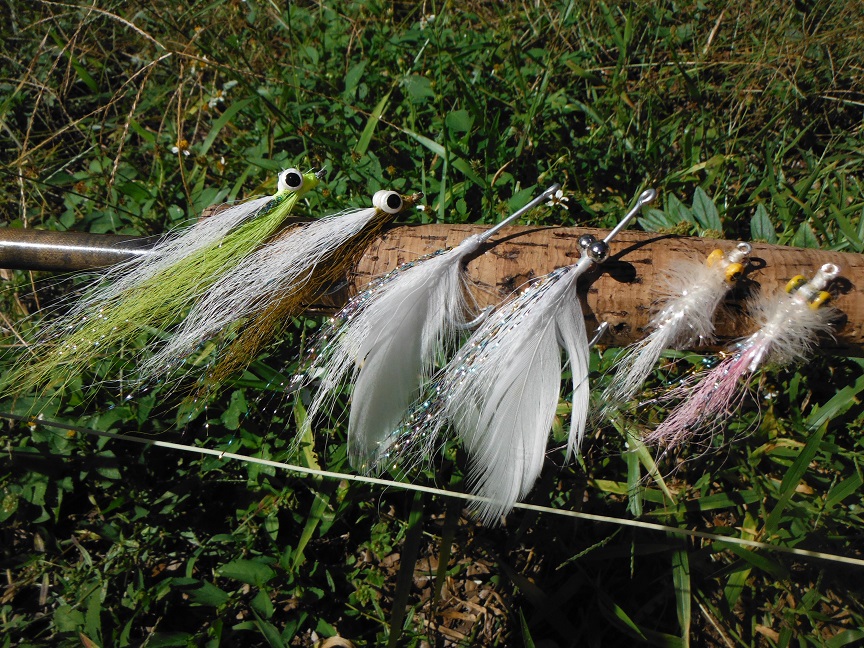 When conditions allow, anglers can catch Spanish mackerel on fly from the surf. Calm seas and clear water will result in baitfish moving in very close to shore. This will attract Spanish mackerel and other species within sight of shore-bound anglers. The best approach is to search for bird and fish activity. Blind casting can produce when baitfish are present.

In conclusion, anglers who have not had the pleasure of catching Spanish mackerel on fly should give it a chance if the opportunity presents itself!