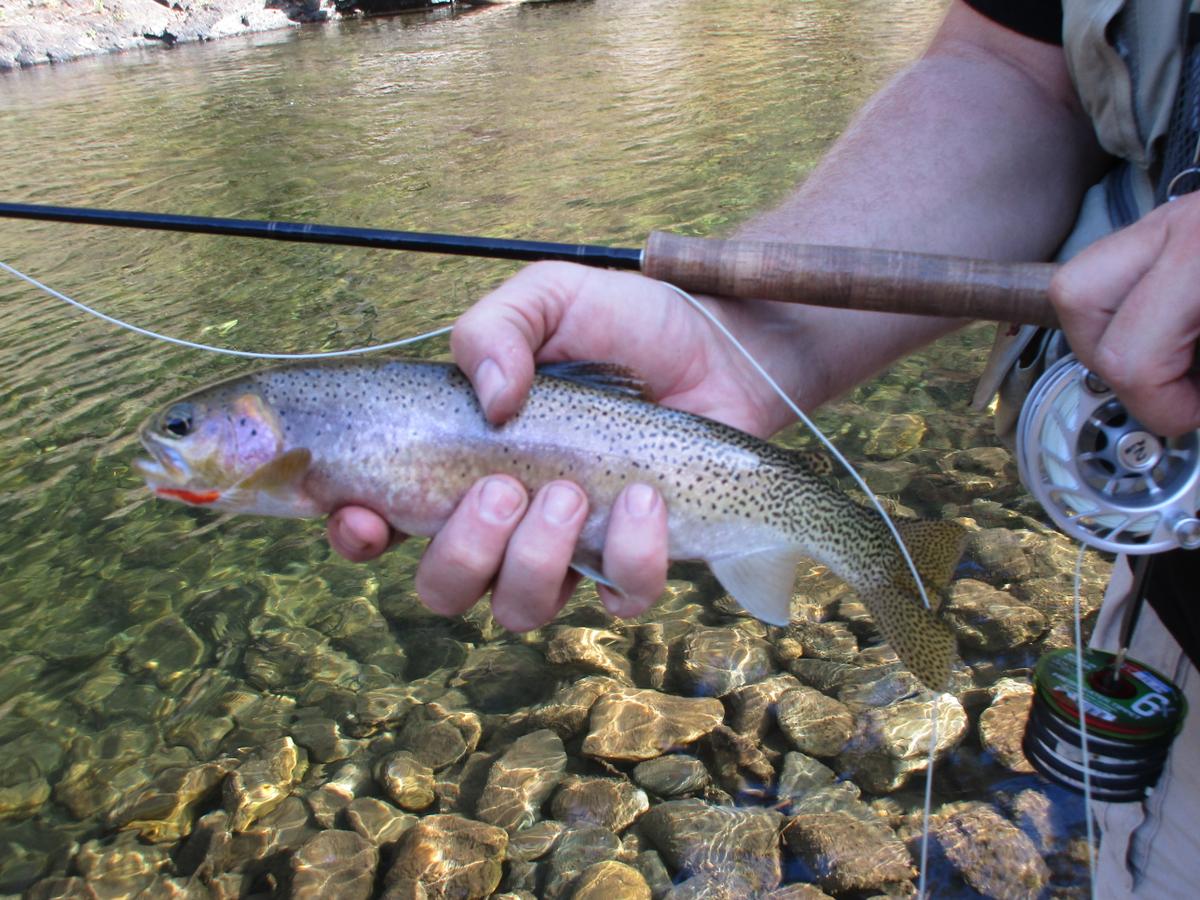 Fly fishing is a surprisingly deep and complex sport. It looks a lot more visually impressive than regular spin fishing – sometimes requiring you to wade deep into the water to cast out your line – but it’s also very nuanced. Despite what some people might think about fly fishing, this is not just a case of waiting patiently for something to bite.

Fly fishing not only requires a fairly strong arm for consistent casting, but also a good amount of timing, strategy, and knowledge of the gear, bait, and fish you’re trying to catch.

What I’ll focus on is gear, specifically the fly rod, and how its “action” describes the way a rod bends.

What Does Action Mean?

For example the ‘actions’ of different fly rods are actually pretty varied and different. In this context, the term ‘action’ refers to the way in which a rod bends when you cast out.

Now you might be forgiven for presuming that every rod would bend in the same way, sure they “bend” but is very pronounced ways. In fact, rods bend in varying different arcs from their butt to their tip, depending on the material, the length, the design and more.

The ideal action for many would be the parabolic curve, which is the same gentle curve that a darts player experiences when they throw a dart into the board.

But manufacturers will vary the action of the rod by adjusting the material, the way that material is organized, and the overall design of the rod. They do this in order to alter the experience for the user, in order to cater to specific individual preferences and requirements.

When considering this, keep in mind that the casting action of the rod should be considered as its ‘primary function’. This is in many ways the biggest differentiating factor between rods, and it becomes especially important in fly fishing and freshwater trout fishing.

Ultimately, you will spend more time casting out when you are fly fishing and less time fighting the fish. In fact, some people suggest that it should be called ‘fly casting’ rather than fly fishing!

In short, choosing the right rod is of paramount importance if you want to get the best experience. And that comes down specifically to choosing a rod with the right action.

What You Need to Know

So then, when choosing a rod, what do you need to consider with regards to the action?

At its most basic, you can split rods into three types of action:

In short, the more the rod bends and the further that curve travels toward your hand, the ‘slower’ the casting action will be. If only the tip is going to bend, then of course you can whip out the line much more quickly and powerfully and it will likewise rebound to become straight much quicker too.

With any kind of rod though, we want the action to go: slow – fast – stop dead. That is to say that you want the beginning of the motion to essentially ‘load’ the rod with kinetic potential energy, then accelerate as you reach the end of the cast. Finally, you want it to come to a complete dead stop which will allow the road to straight (unload) and project the fly-line on its trajectory.

This is something that needs to be ingrained into those new to fishing: it is not all about power but rather all about technique.

Well ‘all about technique’ except that it is also a little bit about the rod. While a ‘bad workman blames their tools’, it’s definitely true that you will have a better experience depending on whether you choose the right rod.

In this case then, what should you be looking for?

The speed of the rod will largely come down to your personal preference, but also your experience. A newer fly-fisher will find it easier to fish using a slower action as they will have more of a curve to contend with, making it more forgiving.

That said, as you gain in experience, you might find that a faster action is better for casting out further – and will let you reach those hard-to-get-to spots when you can’t get closer. The quick whip-bang motion means you can really launch a rod. If you’re unsure, then medium action will be a good choice as it gives you room to grow into while still being somewhat ‘approachable’.

Just know that despite some of the marketing hype, a fast action rod isn’t going to help you cast out further if you don’t have the technique down first. In fact, it may just make life harder given the more difficult technique.

You should also consider the material of the rod. Graphite and fibre rods allow for some excellent action, strength, and lightness.

Be less swayed by fancy terms like ‘tip flex’ or ‘mid flex’. These sound impressive but really they are more marketing gimmicks than anything else.

Things like the weight of the nymphs etc. can also have an impact on the action, as well as on the best rod. That’s because you’ll find that you’ve increased the load, and thereby changed the action significantly. For a heavier fly or weighted nymph, you might find that a fast action rod becomes too fast and too unforgiving. Again though, with lots of practice a skilled angler may find that a fast action rod allows them to fire those heavier lines even further.

Still, for most people, a slower action rod will be better suited to heavier flies. Of course, if you happen to have the money, you can always invest in multiple rods and use them in different circumstances.

While the action will largely impact on the casting out action, it will also actually have an impact on playing the fish. The action of the rod will likely be relative to the amount of give that the same rod offers when you’re fighting to reel in a big catch.

This is what is referred to as the ‘working curve’, where the optimal bend in the rod can provide the ideal amount of cushioning (allowing the fish to move without tearing the streamer out), while still offering enough tautness to lift and pull the fish.

As the fish lunges and moves, the ideal working curve is going to change as well. Of course, a fast action is going to mean a harder rod. That in turn means a tighter range of motion, which of course once again reduces the amount of ‘give’ that you will get from your rod. This becomes an even bigger problem if the fish is above 4-5lbs, and if you are new to fishing.

This is an issue that a skilled angler can work around, finding that ideal sweet spot and keeping the rod in that position until they’re holding their catch above their heads proudly.

But it is also just one more reason that you can’t ‘cheat’ your way to becoming a better angler by using a fast action rod and expecting to suddenly gain expert performance.

Closing Comments and Other Factors

As you can see then, the action of your rod is going to have a large impact on your fly-fishing experience. And this will range from the casting to the eventual reeling in.

Which rod is right for you will depend on your skill level, your personal preference, and your eventual goals.

And that’s before we’ve considered all the other factors. As with any purchase, you need to think about the price. Of course, you also need to consider the other features too: how light is the rod? Does it have any exciting extra bells and whistles?

Are you paying for those additional features instead of just spending all your money on a well-made rod with a great action?

While there are many factors to consider, the best advice is to choose a slow or medium action rod if you’re new to fly fishing, and faster action if you have a bit more experience and you want to cast out further. If you’re going to be using heavy lines and weighted nymphs, consider going a little slower.

But ultimately, the best advice is to try the rods and see what works best for you. You’ll find your own style, and when you find the perfect rod to match that technique, then everything will just click into place.

Dustin Kelley Is a major fly fishing nut and writer for INeedIt.club (visit), when he’s not out on the water working his rod, he can be found relaxing and playing his guitar in his backyard.